So you have been eating yogurt all these while? Indeed, those are probiotic yogurts. It is generally a yogurt product that contains live cultures. Simply put, live cultures are living micro-organisms that are known to benefit health particularly that of the digestive system of the person who consume it, also known as the ‘host’.

By consuming these live cultures, the so called “good bacteria” can greatly enhance the health of the digestive tracts as they kill off other living micro-organisms that share their common living space such as the ‘bad bacteria’ and also destroying yeasts that can be harmful to health. A typical serving of yogurt could contain up to hundreds of millions of live cultures.

These so called ‘good bacteria’ from the yogurt protects the digestive system, especially the large intestine by creating an environment that is more acidic, which is hostile to the growth of yeasts. As such, by keeping a balance between the eco-system of the intestinal tracts is vital as a sudden outburst of harmful yeasts together with the uncontrolled growth of ‘bad bacteria’ is enough to cause various digestive problems. Some of the common good bacteria include lactobacillus acidophilus and bifidobacterium infantis. 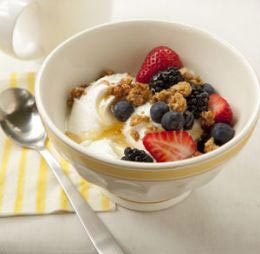 Most of the yogurt products sold in the market these days are in many ways similar to a probiotic yogurt. It means that they are already packed with live and active cultures ready to be consumed. Getting one nowadays would not be a great hassle anymore. They are available almost everywhere right from your local grocery store to the supermarkets in town.

Besides being easily obtainable from most retailers and shops, these yogurts can also be seen on countless TV commercials too. Many advertisers have stated that much of their yogurt products contain probiotics and that by consuming them regularly, they could help prevent many constipation, fortifying the immune system and even providing protections to the heart.

These yogurt products often come with cereals, oats or mixed fruits in them such as apricot, strawberry which are generally some form of prebiotics that can greatly benefit health. It creates an environment where the good bacteria can breed.

Advertisements aside, studies have even found that these beneficial yogurts can help prevent cancers. There are in fact many strains of good bacteria, the most common being lactobacillus acidophilus strain for example, could benefit the digestive tracts by promoting a healthy environment for the growth of ‘good bacteria’.

These ‘good bacteria’ which studies have found, are able to reduce or stop the conversion of bile into a substance that can cause cancer known as carcinogen. Find out also about Bifidobacterium bifidum benefits here.

So what are the health benefits of these yogurts?

In short, the probiotic yogurt benefits include enhancing antibodies and the immune system, reducing the occurrence of diarrhea, rashes as well as allergies. In addition, they can protect against intestinal infections and also aid constipation problems too.

This is particularly true especially when one is taking birth control pills or on a constant antibiotic course which could ultimately result in yeast overgrowth. Apart from that, they can also make available many important nutrients such as vitamins and minerals for the body.

Having known all the benefits of yogurt probiotics you might now want to start living a healthy life. Give yourself a treat and start by taking some probiotic foods everyday. They are not only delicious, but also really brings many benefits to better your overall health.

Also read about prebiotics which can work in synergy with probiotics to give you the optimum health benefits.

Health Benefits Of Prebiotics : What You Need To Know


Do you know what are the health benefits of prebiotics? Prebiotics are soluble fibers that can be found in many of our daily foods. Unlike


No doubt Greek yogurt is tasty and loved by many people, but do you also know that it is now the latest super food for good health? Although


Bifidobacterium bifidum benefits are plenty and it is a unique kind of good bacteria or probiotic that lives inside the human body. Also

What Is Greek Yogurt? : A Distinctive Yogurt For Health


Do you know what is Greek yogurt? Have you even heard of it? Whenever we hear about yogurt, the first thing that comes to mind is the white